A quick visit to Parliament Gardens in Rotorua at lunchtime. 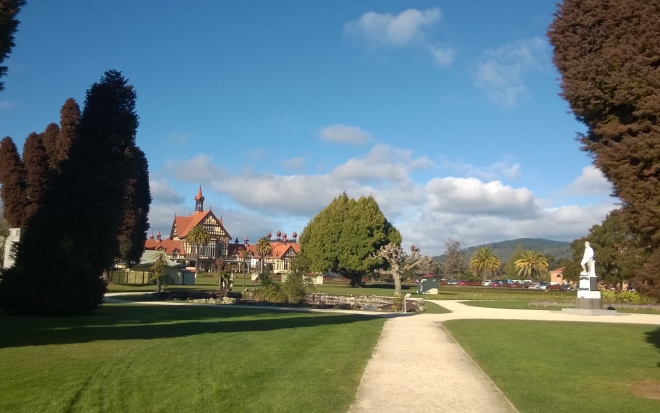 As I have mentioned before, the weather this year has been rubbish – if it hasn’t rained, it’s been blustery. We have had one good day in Dunedin since Christmas. So, upon finding a wind free spot at the Botanical Gardens I was so delighted I had to share my joy. So may I present the second photo of the day for January 14.

On my “Pigalina does new things” theme may I present Port Chalmers exploration!
Port Chalmers is Dunedin’s main port and main stop for the cruise ships that visit us. We have been many times before but usually we are passing through and don’t stray from the main street. Mr Pigalina has ancestors buried in Port Chalmers so I headed out one Saturday to photograph their headstones for my family tree. While I was there I decided to have a look around. As I headed down the hill from the cemetery I stopped at the Lady Thorn Rhododendron Dell. Unfortunately I was too late for the Rhododendron flowers so I will have to go back when it is all in bloom. The Dell is in an old quarry and there is a lookout platform providing a good vantage point over the town.

I am sure this is usually a lovely, peaceful, spot but on this particular day two ENORMOUS cruise ships were in port and there was a relentless honking that could be heard all over the hillside and down in the street. BEEEEEP BOOOOOP, BEEEEEP BOOOOP, BEEEEP BOOOOOP. If that happens every time one is in port it must be a nightmare for the people who live there. It was interesting to see the ships though, as they were gigantic. 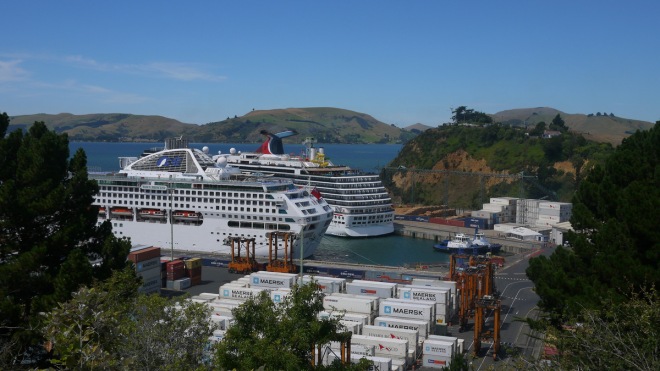 Below the dell is the Iona Church built 1871-72, further down the hill is Chicks Hotel – reportedly haunted and now a music venue. The main street is largely full of cafes and “vintage” stores but is thriving thanks to the cruise ships. A couple of years ago we attended the first Port Chalmers Seafood festival which looks set to return next year. You will also find a small museum that has mainly maritime exhibits, including some of the items taken by Scott on his expedition to the South Pole. On the hill opposite the dell there is another lookout where Mr Pigalina and I discovered a sculpture garden (the Hotere Garden). The garden houses four sculptures, this one is ‘They do cut down the poles that hold up the sky’ by Shona Rapira Davies.

So, not a very comprehensive look at Port Chalmers but a bit of an overview to get you started and, hopefully, this is the start of me getting back to my blog. The weather has been too good for sitting inside on a computer!

Got let off work half an hour early today; so am in the park, drinking a beer and feeding the birds bread rolls like a vagrant, while I wait for Mr Pigalina. Bliss.

As part of the Fringe Festival a naked lady was going to lick her way out of a dodecahedron shaped box made of toffee. Yes, you heard correctly. Obviously I went along to watch. Unfortunately it was postponed for half an hour and there were so many creeps lurking around I went to the botanic gardens instead. Here is what I could see while lying on the bench. Sorry I didn’t get a photo of the toffee box lady!