Last week, my family and I spent a lovely day and night on Rottnest Island in Western Australia, home of quokka (see below – merrily eating a chip). I got a swim in the Indian Ocean under my belt, a sticker for my suitcase and the obligatory quokka selfie. 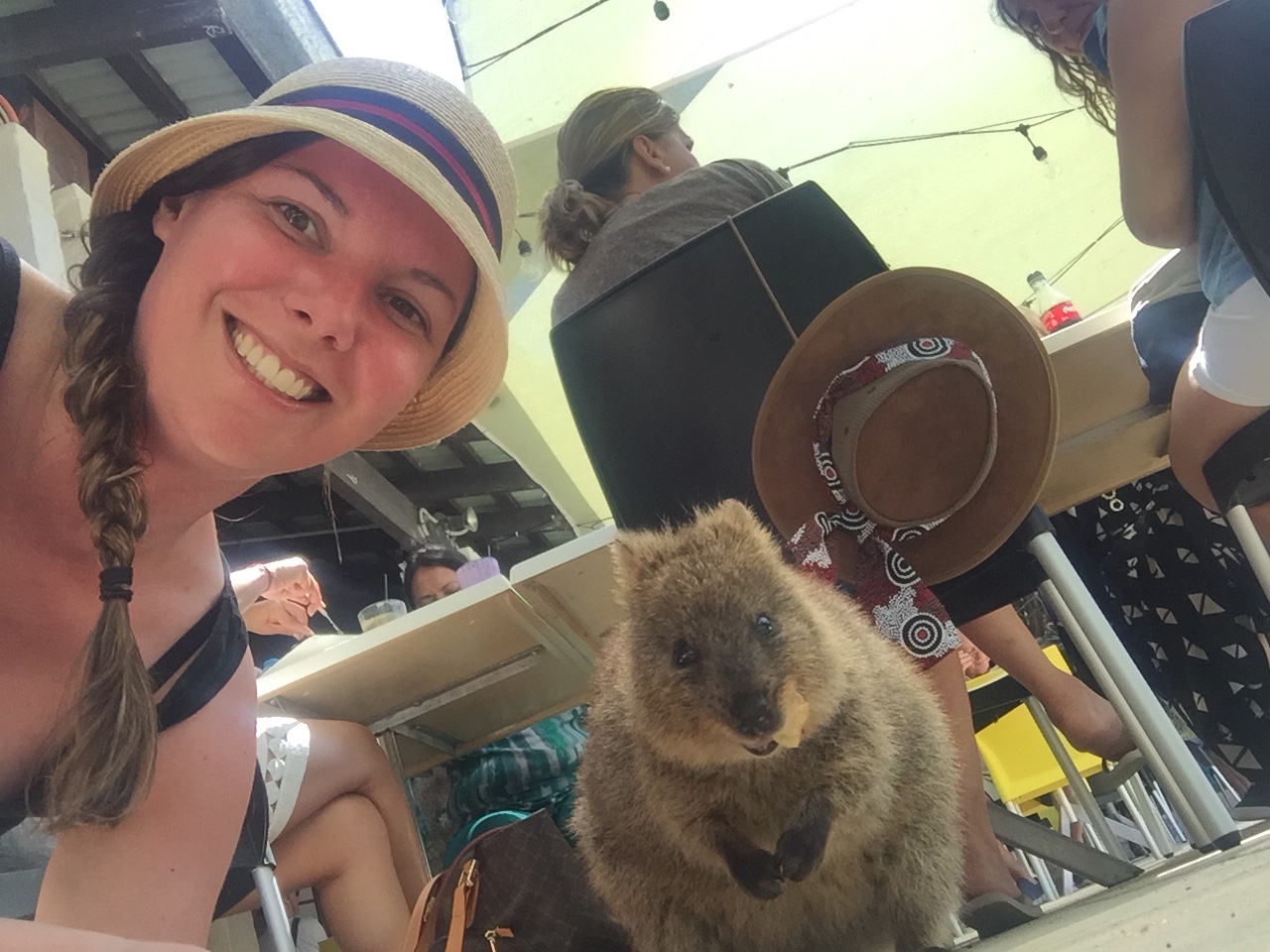 The next day the Pigalinas hired bicycles to tour the island a see the sights. I was riding along happily thinking about lunch, looking at the lighthouse in the distance and the salt lake next to me as I started downhill. While freewheeling downhill I noticed my (work)phone and selfie stick (don’t judge…) in the drink holder were wobbling and looked like they would fall out. In that brief moment of lost concentration, I may have reached to move them – I can’t remember – I flew over the handlebars and landed on my face!!

Yes, I did take a photo (I said don’t judge!), I took it before I realised how bad my fall had been and as soon as I spat out some of my precious teeth (more came out after). I needed to survey the damage. Luckily for me two off duty nurses were on hand to tend to me while Mr Pigalina phoned for help. Some lovely passers-by shielded me from the sun and wafted the flies from wounds while we waited for transport.

An ambulance was offered but as I felt OK we opted for a regular ride, who turned out to be a guy from the bike hire shop in a Ute. Mr Pigalina was not permitted to ride along and had to cycle the 3km in the hot sun to the nursing station. Later he said he had thought adrenaline would kick in like in the movies and he would breeze along. It didn’t.

At the nursing station they patched me up and called ahead to a hospital in Perth while we waited for the next ferry. One ferry and taxi ride later, while nursing a bleeding ear canal, we arrived at the hospital. I was scolded for being “so English” and not making too much of a fuss about my injuries but the truth of the matter was, it wasn’t that sore. Although I also don’t like a big fuss. An X-ray and CT scan later it was determined it had broken my jaw in two places which came as a huge surprise!

A big farce followed due to me being an overseas patient. It’s nobody’s fault but let’s just say:

Scaring children on the ferry

After being declined by the travel insurance and hearing it could take up to four weeks in Australia for the surgery I decided to ride out the rest of my holiday all patched up and get sorted back in NZ.

I made the most of the rest of my holiday, despite being on a liquid and mush diet and looking dreadful with my bandages with a front tooth rapidly changing colour. Saw some wild kangaroos, went to the beach, visited Fremantle prison. No time for mooching about!

Finally on the way home, After an almost 7 hour flight back to NZ we were told to “make haste” by the flight crew in order to make our connection home. It’s very hard to make haste when you still have to queue to get off the plane with everyone else and, what’s this?, they parked the plane ages from the airport so everyone getting off the plane has to BUS to the terminal?! Then you have to find your bag, clear customs and then race ten minutes to the other terminal with a heavy suitcase with a wheel kindly broken by the baggage handlers. Dragging my broken 20kg case, making haste, while carrying two other bags and wearing a coat, powered by the little bits of mush I could glean from my plane meal (hummus, mashed peas) was the second time I cried. The first was when I realised now have meth-head teeth.

Once home, the ball finally rolling, my surgeon here said I DON’T EVEN NEED SURGERY. A six week mush diet should see my broken jaw heal itself. I could have had unneeded surgery AND a six week mush diet. And a four week extended stay in Australia. It isn’t all smooth sailing though as I am yet to be assigned a Case Manager to discuss getting my teeth sorted due to where I work. Sigh. And it’s mush for graduation, Christmas and the Pigalinas’ Wedding anniversary.

It gave me something to write about though!

Today the Pigalinas biked to the top of Signal Hill. Thank goodness we got to ride back down afterwards as a reward because uphill nearly finished me. (I haven’t been on my bike since well before Christmas – that’s my excuse).
Here is a picture of Mr Pigalina about halfway up; red faced, huffing and puffing Pigalina out of shot.