Hedgie smells terrible. To be more specific, what comes out of Hedgie smells terrible. The little creature is almost like one of those Play-Doh contraptions where you put the dough in, squeeze and sausages in various shapes flow out. In his case, dog meat goes in and nearly instantaneously appears out the other side, only ten times stinkier. How he can produce so much boggles the mind.
I looked it up online, people keep hedgehogs as pets so surely this level of stink and poo can’t be normal. Apparently it is. There is no way Hedgie will be becoming a permanent indoor fixture that’s for sure! He has been relegated to the spare bedroom but the stench creeps from under the door.
I have washed and changed his bedding three times in four days; I clean up his droppings and wipe up his wees about four times a day yet still it reeks. I retch and heave unless I hold my breath or cover my airways.
I have no idea how people keep them as pets, any vague images I had of him becoming part of the family have vanished in a haze of smelly vapours. Once Hedgie has reached his goal weight he will be going to live outside as nature intended where he can stink up the neighbourhood all he likes.

As I was driving home from work yesterday I spotted a very small hedgehog merrily walking down the middle of the road. Thankfully my car is a tip so there was a towel on hand to wrap it in and whisk to safety. I popped him (gender is unknown but I am going with male) still curled in a ball in the towel into my garden and went inside for some dog food.

While he was wolfing down his Pedigree Little Champions homestyle beef, pasta and veges I Googled what to do. He was out in broad daylight so something was up. I found the number for NZ Hedgehog Rescue and left them a message. I then watched the imaginatively named Hedgie as he strolled along the width of the garden into a patch of (the bane of my life) vinelike weed. Hedgie seemed pretty sprightly and had eaten a meal so I headed inside.

NZ Hedgehog Rescue called me back and inquired about his size – just slightly bigger than a tennis ball when curled up. The lady informed me that he was too small to survive on his own and asked if I could take him into the rescue centre. Without a trip to the North Island on a plane I could not and thus became a hedgehog carer. I am to get his weight up to 700 grams so that he will be insulated enough to survive a Dunedin winter. Hedgehog Rescue said Hedgie was probably out searching for his Mum who was likely to be dead.

The first task was to locate him in the bushes. My dog went crazy trying to find him and I also scrabbled around, agitating the dogs who live over the back fence. When I couldn’t locate him I retired inside hoping to spot him later creeping about for more Little Champions. Sure enough, once the sun had gone down there he was, feasting.

Hedgie was bundled up and placed into his new enclosure – a plastic tub with one of the dog’s blankets shredded up and some strips of newspaper. The poor chap spent the evening trying to escape, attempting to climb the walls and, when that failed, trying again with slippery, wet, feet courtesy of his water dish.

I tried to weigh him on the bathroom scales but he was too light to register. Mr Pigalina is out of town so has not yet been exposed to the madness in person. When he is back one of the first tasks will be an official weigh-in. 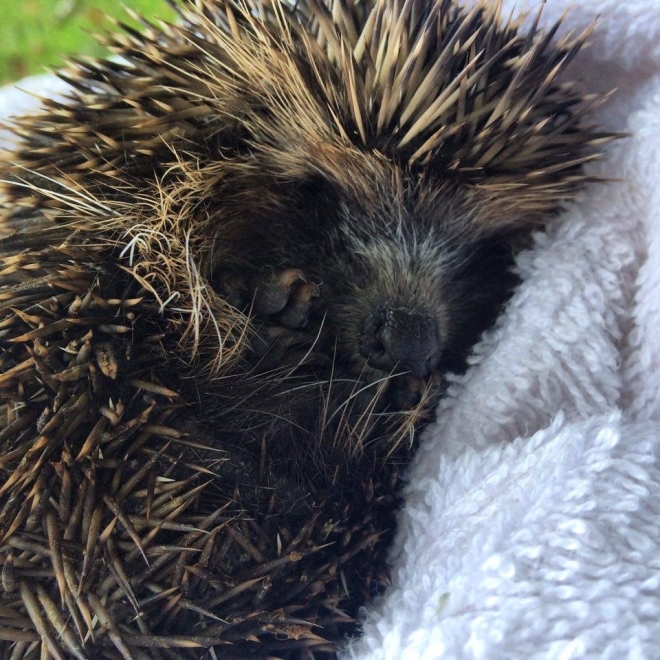 After five years of us living in our house, the Cabbage Tree in the front garden grew a new sprout. Both Mr Pigalina and I were quite excited by this development.
Today we arrived home to find the sprout lying on the grass. It was too high for a person to reach and snap off and there was a longish white hair stuck to it. This has led me to the conclusion that the culprit is next door’s cat. Not satisfied with costing us money and sleep thanks to the beatings he dishes out to our cat in the middle of the night; he has now taken up tree vandalism!
I will attempt to plant the sprout in a pot tomorrow. 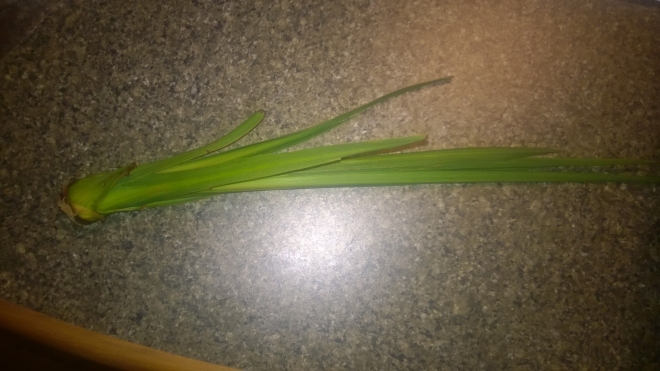 We are at an R18 punk gig with F and C bombs flying. A lady and her approximately 10 year old son just came in. I can’t decide if this is terrible or awesome parenting.

Mr Pigalina just asked me to remind him to drink a litre of water before bed as he has work tomorrow. Not me! I am sensible, I also told him LAST YEAR to book the day off.

Had some delicious noodles. Everyone eats noodles at gigs/the pub, right? 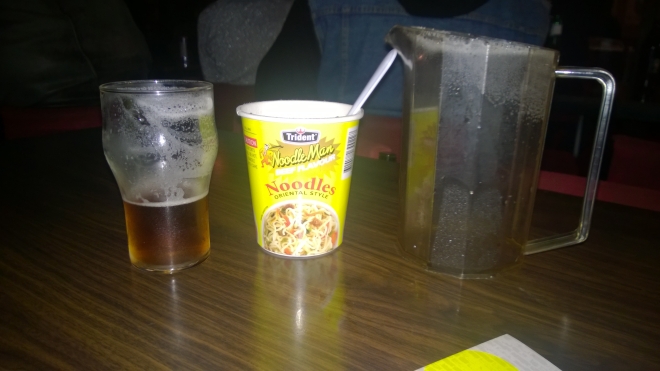 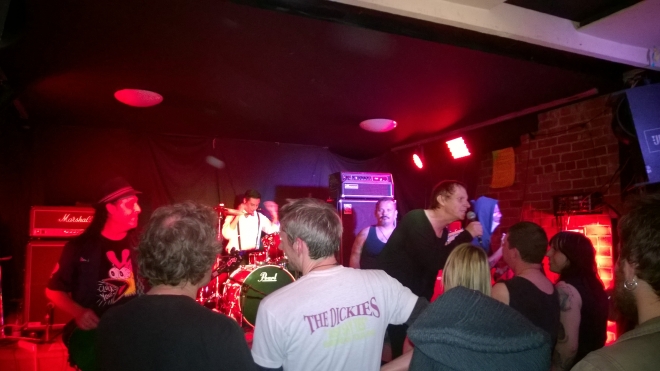 Although it was April Fools Day the Department of Internal Affairs made sure that my Citizenship Ceremony was in the afternoon – meaning it was unlikely to be an elaborate trick.

Yes, after 20 years in the country I can now officially call myself a New Zealander.  (It was purely slackness on my part, it usually doesn’t take that long.)

Here is a rare glimpse of Pigalina with Mayor Dave Cull. 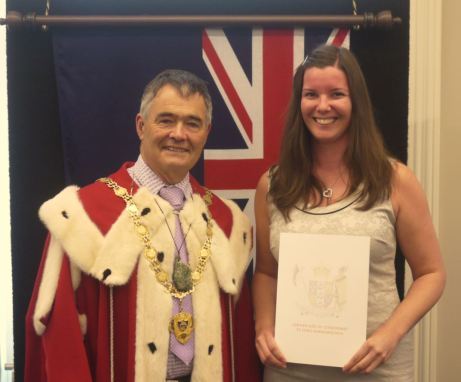 We headed out to the end of the Otago Peninsula to investigate what is there, as it has been many years since we did.
Pilots Beach held a wealth of seals and they were not scared of humans – sunbathing on the rocks within feet of the many people. Living at the site of one of Dunedin’s most popular tourist attractions (the albatross colony) will do that to you.
The other side revealed steep cliffs with a view of the lighthouse and numerous nesting birds. We didn’t spot any albatross but I can confirm you can see some good sights at the end of the peninsula without spending any money. 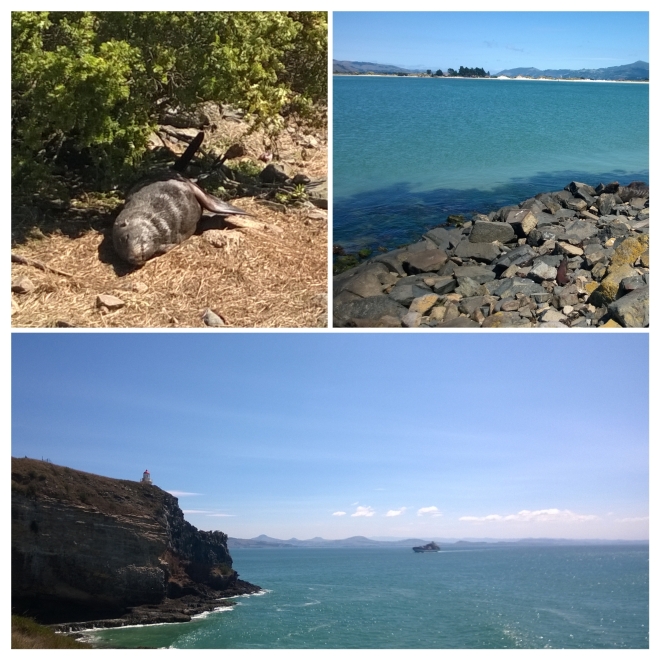 Waitangi Day and the country was on holiday. In Dunedin it rained constantly so it is a good job we have a covered stadium (take that stadium haters…). Nitro Circus came to town and they were spectacular. I didn’t get any photos of the action as I didn’t want to miss any of the action and there were plenty of other people taking shaky videos and grainy snaps.
We saw a backflip on a motorbike with four people riding it, a front flip, wheelchair backflips, triple backflips on BMX and so much more.
Mr Pigalina had pondered if two hours of flips and tricks would get a bit boring, it certainly didn’t!

(The only bit I would change was the irritating family in front – kids throwing food, oblivious dads and one drunken mother who spent the whole show taking selfies and texting.) 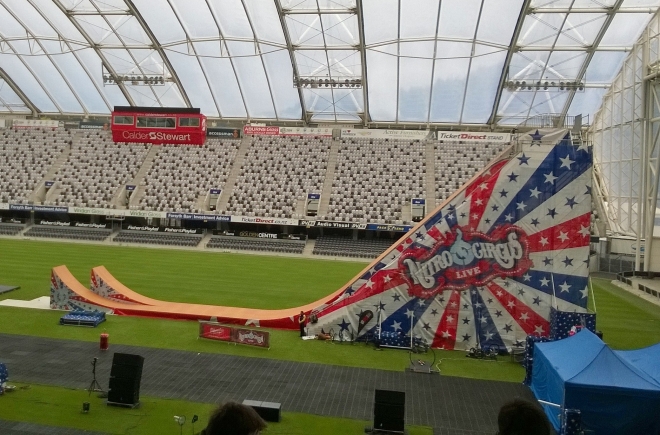 My little sister has had a little baby! Welcome to James, the first NZ born baby of the Betts/Robinson line. 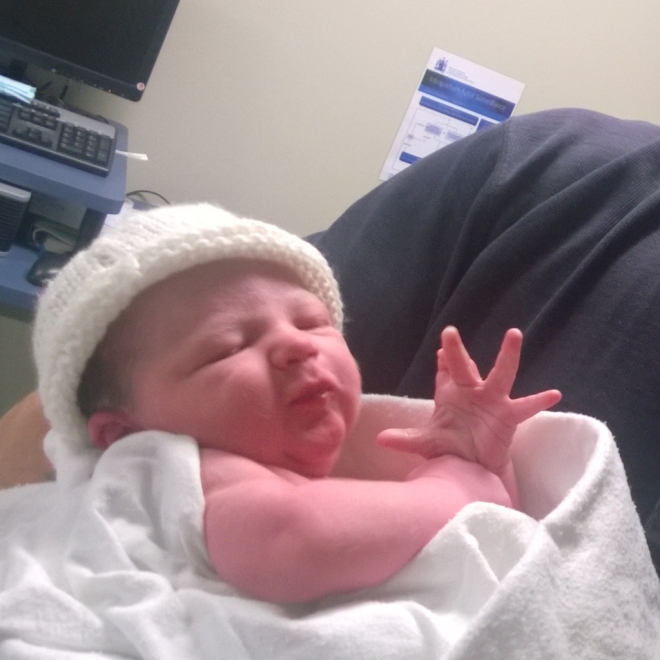 It turns out it matters what colour you are if you are a seagull in New Zealand, and I’m talking beak colour.

There are three types of seagull in New Zealand – as far as I have determined – yellow beak big ones, red beak and black beak.  I am not sure which colour makes you the most important but *spolier* it’s not red.

Today on my way to work a seagull was sitting on the grass next to the footpath.  It didn’t make any attempt to move when people walked past so I knew something wasn’t right.  I went to touch the bird and it did move, and then I noticed that both of its legs were out behind it and it was “sitting” on its belly.  There was no way it could fly away as it could not push off the ground with its legs.

I called the Department of Conservation (DOC) hotline for injured wildlife.

“Do you help seagulls?”

“What kind is it?” they asked

“One of the ones with the red beak and red legs.”

I then had to find the number and call the SPCA “No we don’t, try DOC.”

“I just called them, they said to call you.”

“Tell them that you are in Dunedin, the Dunedin branch helps those kind.”

I called DOC back again and the lady didn’t sound very interested, I explained how the SPCA had said that the Dunedin branch helps them so therefore I had called back.  She asked if I could take the bird to the office – no, not without wrangling into my cardigan and carrying across busy roads and a few blocks.  She logged a job with them and said that they would call me back and instructed me to call the Dunedin office myself also.  I did.  They were shut.

Just as I was hanging up a young man appeared.  He asked if the bird was hurt and, as if to demonstrate that yes it was, it scooched awkwardly across onto the footpath.  I told him the saga and he said that his mum had helped lots of injured seagulls out so he would take it home.  He threw his jumper over the bird and said he would head home to feed it up on cat food.  After declining a ride he was gone, bird in arms.

DOC did not call me back until almost 40 minutes later when I was at my desk.  I would have been late for work, and would have stood on the side of the road for close to an hour.  When I told them that the bird had been taken by the kind boy the woman said “It probably won’t heal.”  “He will make it comfortable anyway.” I replied.  I know your game DOC, you would take my injured bird and kill it without letting it rest on a nice bed scoffing cat food before it goes!  At least it got taken in by a family that cares, even if its days are numbered, not left on the side of the road for hours by the organisations supposed to help creatures. 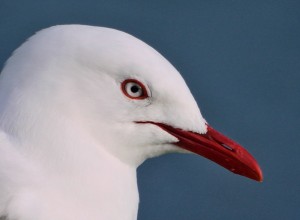 I had just finished the final level of Peggle 2, thus earning the prestigious achievement of “Peggle Master”, when the power went out.
It was windy outside and a downside of my fabulous suburb is that, during very high winds, we tend to get power cuts due to falling branches. I was just about to call the line company when we noticed that some things still had power. Must be a fuse. We examined the fuse board and we were still confused. I called Daddy Pigalina who is an electrician.
He interrupted his Sunday afternoon and came to examine the problem. Only 50 volts were coming into the house.
It turns out a tree had caused the problem. One of ours. It had snapped the neutral cable where it entered the house. Our wiring, it seems, is about 60 years old…
Mr Pigalina hacked the tree back and I called the line company who turned off the power to the house while Daddy Pigalina patched up the ancient cable.
Next weekend he is bringing us into the 21st century. Thanks Daddy P! 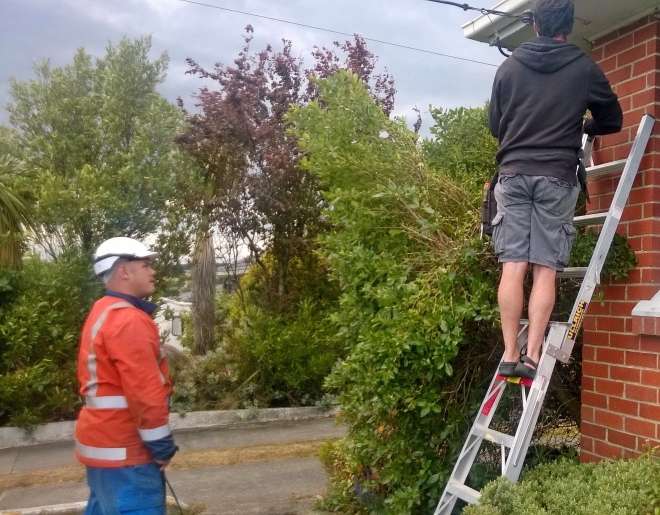